American Ed Huesers has developed a method by which it is possible to erect an igloo/iglu in the space of as little as a few hours. The most important tool is a mould that is attached to a long pole, with a spike in the end that is placed in the ground. The mould can then be moved around the circular shape while the other end is anchored to the ground. The mould is filled with snow. When the snow has hardened, the mould is removed and is shifted around one space. In this way the arch of the hemispherical structure is build up brick by brick, level by level. It is possible to adjust the angle of the shaft of the mould, so the device will always produce the same kind of arched-roof igloo/iglu.

The technology is based on the observation that frozen snow warms up slightly when it is stirred. Then when it is packed hard into a mould, it solidifies quickly and the end-product is a white brick. The snow supports the snow above it, and the bricks form a stable structure. Eskimos are able to construct an igloo/iglu more or less by eye, like a good cook can put together a meal without a recipe. Matti Verkasalo recommends the average hiker puts his or her trust in ready-made plans and instructions. The equipment required for building an igloo/iglu weighs around 2.2 kg. It can be packed into a box of 65 x 36 x 8 cm, which can be slung for example on the back of a rucksack.

Regardless of the snow conditions, an igloo/iglu can be put together by practiced hands in two to three hours. There is a ventilation hole in the roof and an air vent at the lower part of the door opening. It is possible to use a primus stove inside, and if it is built correctly there is no real danger of carbon monoxide poisoning inside the igloo/iglu, as any gases caused from burning would escape through the door vent. The interior temperature is around 0¡C, if there are a few people inside. Body warmth heats up the interior ambient temperature, and a couple of candles will also increase the heat inside. 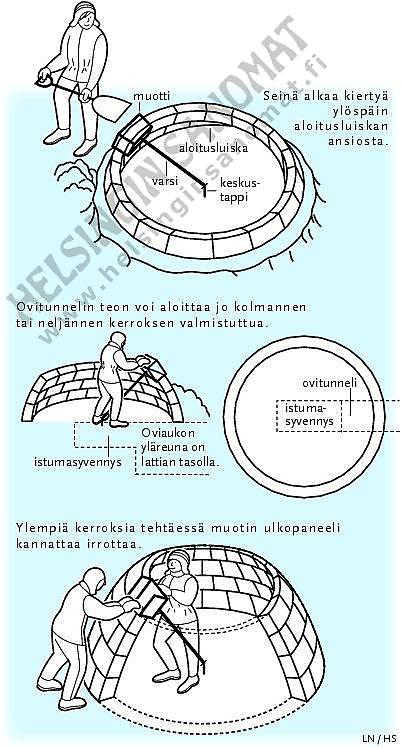 An igloo/iglu mould can be rented from Suomen Latu (The Central Association for Recreational Sports and Outdoor Activities) for EUR 10/day, EUR 17/two days, or EUR 67/week.