Advantages of building an ICEBOX® igloo versus snow caves or Quinzees! 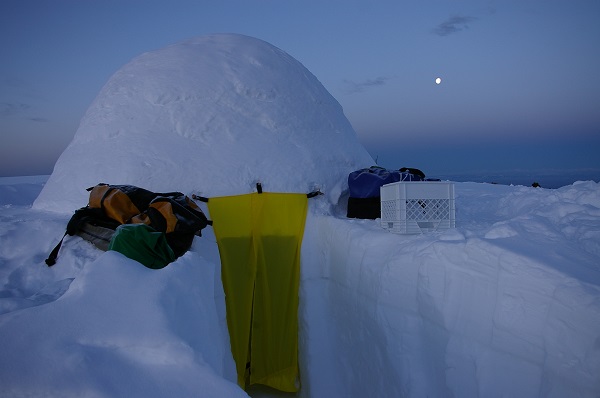 The ICEBOX® built igloo for winter camping is easier than building snow caves or quinzees in snow country. It may not turn you into a winter survivalist but an Igloo is a superior alternative to building snow caves or quinzees. The three most beneficial aspects of building igloos using the ICEBOX® Igloo Tool over the dogged shoveling involved with building snow caves are work, work, and work. It takes 50% or less time and effort using the ICEBOX® to build a snow shelter. An igloo can be left in place for the winter camping season. It is much easier to find when you want to return during the season. It is much less resource and physically taxing to set up your season long winter camp.

No Sweat –The effort required to build snow caves or quinzees expends calories causing fatigue and sweat. While a person’s internal body temperature heats up from the exertion inside a cave or quinzee, external skin gets cold and damp from the wetness of sweat and melting snow. This moisture easily soaks into gloves and coats making the cold unbearable. People digging out a snow cave quickly become uncomfortable and tired. Maybe even close to hypothermia as they fluctuate back and forth between being hot from digging to standing around and freezing while taking a breather. A good thing to do in this situation is to wear Gore-Tex clothing and take care to stay as dry as possible. 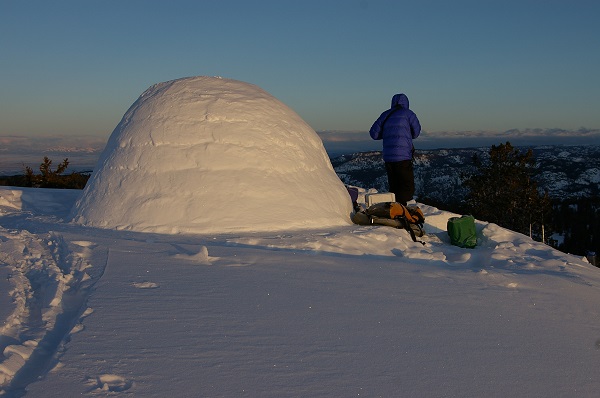 With snow flying and dripping, you are going to get wet, So a better thing to do is to avoid this situation altogether. Enter the ICEBOX®. Building the ICEBOX® igloo takes less time, less energy, and you won’t be fatigued when you’re done. Indeed, you’ll still have plenty of stamina (and probably daylight) left to organize the camp, cook, and set up your sleeping bags. The igloos make for a very enjoyable evening.

When building an ICEBOX® igloo for snow camping or as a snow shelter, you’ll be outside the entire time, until the very last block. Your body heat is cooled by the outside temperature and stays cool while falling snow isn’t melting onto the top of your head. So your winter camping trip doesn’t become winter survival, buy an ICEBOX® Tool, it’s the cooler way. 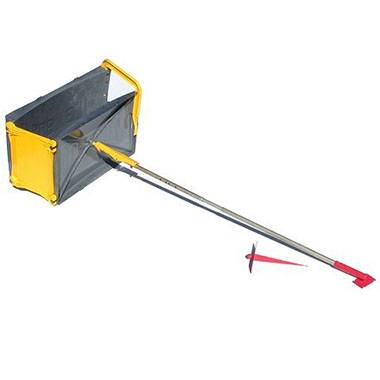 Igloos Are Physically and Environmentally Friendly

Prime real estate is not always easy to come by when scouting out a spot for a snow cave. The snow isn’t always deep enough and drifts aren’t always in the most desirable of places. Snow caves built into drifts are smack dab in the middle of nature’s vengeful path. The word “drift” brings up images of wind, and that wind isn’t going to cease just because there’s a new hole in the snow. The wind will still blow, will seek entrance into your snow cave sanctuary, and has predetermined that where you decided to make your home for awhile is where it will continue to stack up more snow and attempt to bury you and your efforts.

Do the words winter survival come to mind? Snow cave doors and vent holes will also pile up with new snow, snow will continue to invade and penetrate, and you’ll probably get all grouchy again. But not as grouchy as if some unsuspecting passerby or fellow camper walks over the top of your snow cave and, quite literally, drops in on you. Not so with an ICEBOX® igloo. It’s above ground, wherever you want to put it, and highly visible. So pick yourself some prime real estate. A nice calm spot. A sunny exposure. A scenic view. Freedom of choice, yet another ICEBOX® advantage. 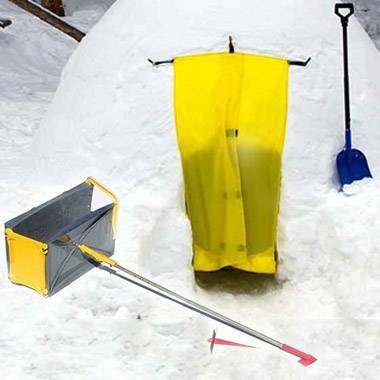 Snow caves can become like an earthly black hole, bocking available light and zapping your energy, making you feel like a human collapsing star. Inside an ICEBOX® igloo, you’ll see the light. The snow used to fill the ICEBOX® Tool, whatever type, is re-mixed, making it airtight and creating a strong bond. It’s brighter inside because the igloo walls are thinner, allowing light through, in contrast to the snow cave’s black hole effect. Even full moonlight can penetrate an ICEBOX® igloo. The benefit of this additional light is a saving of valuable candle and flashlight resources. It’s warmer, too, because with the airtight bond, cold air doesn’t seep through the snow crystals like it would in a snow cave. You won’t have to sleep with your water bottle as your bed mate to prevent it from freezing. See the light. Feel the warmth. Fill the ICEBOX®.