Although the fear of the cold is enough to make most people stay inside their houses warm and cozy, these days, there seems to be a renewed interest in snow camping. Although it takes a while to convince first-timers to get out in the cold, snow camping—including igloo making—is one of the most exciting and worthwhile experience to add to your bucket list.
Why Camp in the Winter?
One of the biggest reasons for camping in the cold is experiencing nature at its most harsh and brutal. If you stand up to the challenge and brave the hard winter night in the wilds, it can be an exhilarating and life-altering experience.
Another great reason is the low cost of campsites, many of which are free during the snowy season. Additionally, you do not have to fight the crowds.
Isn’t Winter Camping Dangerous?
One major reason why people don’t enjoy camping in winters is the bitterly cold weather. Unlike animals, our bodies do not have natural wool or blubber to insulate us from the cold in sub-zero temperatures. Therefore, we run the risk of hypothermia if we are exposed to the elements. However, with a bit of preparation, snow camping can be just as fun, comfortable and exciting as summer camping.
…Which brings us to the tools.
Technology has improved a great deal since when Eskimos used to make igloos. The tools these days are much lighter which makes them easier to pack and haul. However, the cost of snow camping tools can be prohibitive for many who do not have the appropriate equipment already or are trying snow camping for the first time.
That’s not the case with the ICEBOX® igloo maker.
This innovative equipment makes a very merry-looking igloo in just two to three hours and weighs and cost much less than a four-season tent. 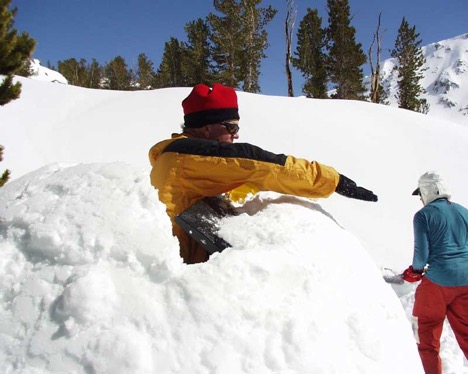 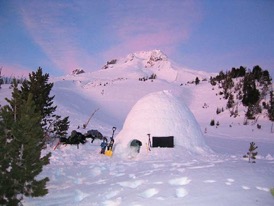 What Is The ICEBOX® Igloo Maker?

The ICEBOX® igloo maker is basically a plastic device for building the best kind of snow shelters — igloos. It consists of four plastic panels and an adjustable aluminum rod that comes with a spike. Instead of cutting out blocks of snow, the ICEBOX® igloo maker lets you pack snow into the mold to make your bricks. The rod is anchored to the center of the igloo and rotated on its axis to form layers of uniform, tightly-packed snow bricks. Its biggest advantage is that it can use any type of snow to form an igloo. This means you do not have to go to the added hassle of digging deep into the snow to get to the denser snow beneath. The ICEBOX® igloo maker can do the trick for you.
The ICEBOX® igloo maker weighs about 2.2 kg, which is about the weight of a single-person tent. But since a group of people can share the igloo, the equipment weight is lighter, collectively. At just $189.95, the ICEBOX® igloo maker costs less than half the amount of some four-season tents.
Why an Igloo?
There can be no doubt in the mind of those who love the ice and snow that an igloo is far superior to a tent. They are immune to the stiffest wind, are much warmer, and can be made much bigger than a tent.
Additionally, there is an excitement factor in spending the night in an igloo as well. What makes igloos so amazing is the wonderful and profound silence produced by the snow. All sounds are completely hushed and you can snuggle into your bed for a well-deserved rest.
Unlike tents, igloos also retain body heat or the heat of whatever you choose to light inside the igloo. As a result, you wake up with toasty warm toes — even when there has been snowfall outside!

The ICEBOX® Igloo Maker Gives You License to Chill

There is a reason why winter camping is fast becoming a favorite activity. It is fun, less expensive (but more exciting), and you will have experiences that summer campers never have. Next time you think about taking your family to an outdoor camping trip, check the igloo making box as well. That will give you some great pictures for Instagram.