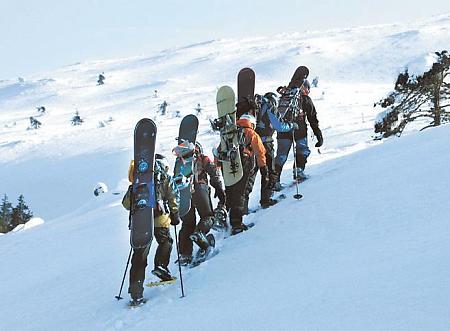 Some five years ago, paediatrician Matti Verkasalo began to ponder the idea of blending hiking in the wilds with snowboarding. The carefully-groomed pistes of ski-resorts had begun to lose their sheen and even seemed oppressive, and Verkasalo wanted to take the sport back to where it originated: in the deep powder. Would it be possible to head off into the mountains with snowshoes on your feet and a snowboard strapped to your back?

Verkasalo also came to the conclusion that it was not necessary to go all the way to Central Europe to find and uncork virgin slopes. “Our own fells up north are delightfully soft-shaped and curved. They are ideal for safe off-piste snowboarding.” The first experiments in the hybrid of cross-country snowboarding and wilderness treks took place at Kiilopää (near Saariselkä in Northern Lapland) in 2001. This was followed in successive years by trips to Pallastunturi (805m., in Muonio) and to Ailigas (620 m., up by the Norwegian border near Karigasniemi). The plans firmed up into the idea of always setting up a base camp from where it would be possible to climb the surrounding fells and explore their slopes. Each of these slopes can be around 200 metres in terms of vertical descent. Climbing up something like this in snow-shoes and with a snowboard on your back is equivalent to jogging for around ten kilometres, says Verkasalo. “And then you multiply it by four or five times each day.” 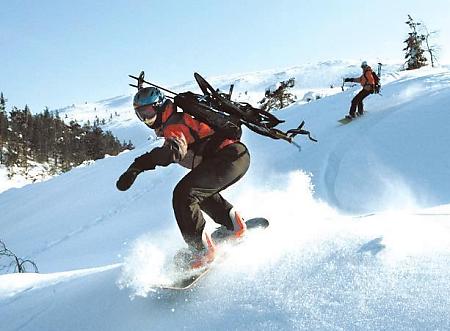 He stresses that those taking part should not be thought of as extreme boarders in search of big off-piste kicks, but more that they are trying to fill the large footprints of the fell-wolves and to learn more of the skills of living wild in the hills. The aim of those taking part in expeditions like this has been to take a humble and respectful view of nature, one another, and of the really experienced trekkers and the truly gifted snowboarders out there. There is something to be learned from all directions.

Verkasalo also points out firmly that no risks are being taken – it can all be done with due attention to safety considerations. “Cross-country boarders don’t throw down the gauntlet to nature or test the patience of their guardian angels. They check the avalanche forecasts and choose the safe slopes accordingly”, says Verkasalo. He believes that even a beginner can study and practice the fusion of snowboarding and wilderness hikes. He points to himself as a good example of this.