Why Igloos Make the Best Winter Tent in the Snow 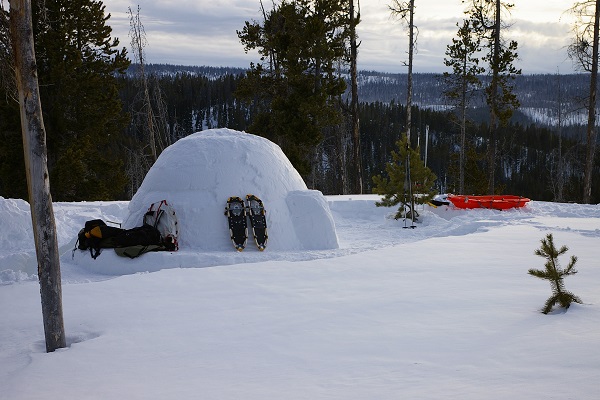 At first, many people scoff at the idea of spending the night in an igloo. It might seem like a far-fetched, outdated idea. However, with a little research we learn that there is a very good reason why the Inuit have been building them for centuries. It’s not because they didn’t have any other options. It’s because igloos are actually the best option for a warm, winter shelter! Far better in fact than any snow tent you can find.

This fact was recognized by Ed Huesers in 1975 when he moved to Colorado. Years of winter camping had taught him that real snow shelters were warmer, stronger, and quieter than other tents designed for winter snow camping. However, since snow caves could only be built in places with deep snow, his choices were limited.

That’s when he thought of building an igloo.

The Inuit have always used blocks of hard, compact bricks made of snow to build igloos. However, the snow in Northern but non-Arctic regions, including Ed’s beloved Rocky Mountains, was too soft and powdery to build with. Ed needed a solution! As it turned out, he owned a plastic company and he began to experiment with plastic molds. His goal was to find a way to hold the snow together and prevent it from crumbling. That was how the phenomenal ICEBOX® igloo maker was created!

The ICEBOX® igloo maker weighs just 2.3 kg, which is much lighter than a 4-season tent. It’s also a fraction of the cost of a winter tent and far superior! Read on to find out how it works. 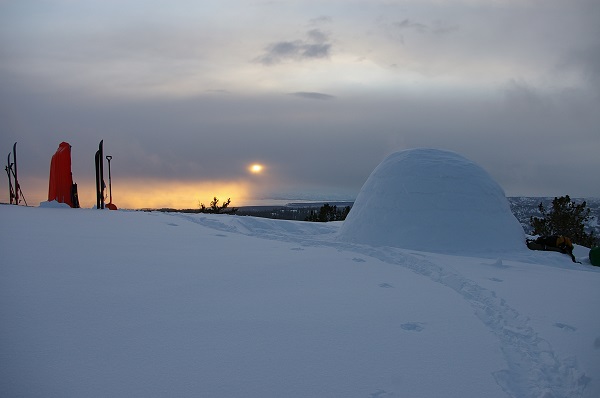 Stable Structure: Unlike winter tents that flap around and may even been blown away by strong winds: igloos don’t budge or become uprooted. That’s because they are supported by a stable catenary curve. This ensures that the blocks of ice do not collapse in on themselves. In fact, Ed Huesers is so confident in their strength, that he claims that igloos made with the ICEBOX® igloo maker are strong enough to support the weight of three people! Even though building an igloo takes longer than setting up a winter tent, it lasts much longer too. An igloo built out in the open can last for several weeks. An igloo built near the shelter of the trees, away from direct sunlight, can last for an entire season.

Warmth: Tightly packed snow is filled with air. This trapped air serves as a great insulator and is definitely not something a winter tent can do. The inside of an igloo can reach as high as 40 degrees, sometimes even more! Compared to this, winter tents are only 10 degrees warmer than the outside temperature. Not to mention how the temperature drops if you open the flap and the cold air rushes in!

Space: Since an igloo is shaped like a dome, it has more space than a winter tent to stow your gear. It can also pack in more people than a tent can. The ICEBOX® igloo maker can make igloos of varying sizes with the help of an adjustable pole, which can give you a maximum space of 95 square feet. An igloo is also big enough for a person to stand up and stretch. Another feature that tents don’t have!

For everything you need to know about winter camping gear and how to use the ICEBOX® igloo maker, read our article HERE.

There are so many practical reasons to opt for an igloo rather than a winter tent. Stability, warmth and extra space are all logical choices to do so. But there’s even more than that…it’s the sense of adventure and survival that come with it! It’s knowing that you have created shelter for yourself and your group with your own hands. It’s the confidence of being able to survive in the wilderness, no matter what Mother Nature throws at you!