ICEBOX® configuration inside dimensions and weights:

Comfortable sleeping capacities for people 5’8″ (1.54m) without a trench are:

Want more comfort? Dig a trough across the igloo allowing you to sit with your legs hanging instead of cross-legged style. You can build with any snow conditions allowing you to stay in the woods and out of the wind. Snow types include sugar snow, slurpee type ice, depth hoar.

Most noteworthy, building an igloo takes 50% less effort than is required to build a quinzhee or dig a snow cave of equivalent size. Build time is approx. 1-3/4 to 3 hours depending on snow quality and quantity. The short build time will not cause fatigue and being outside while building, you will stay cool enough to prevent sweating.

Backpacking with the tool is simple due to our design making it easy with the supplied straps and buckles. Straps have easy release buckles allowing the builder to keep gloves or mittens on. The assembled slip form has auto release snaps to prevent form from breaking if it happens to fall while full of snow. Snaps also help in assembly of form allowing builder to keep gloves on. All parts are made of bright colors to prevent loss of smaller pieces in snow. The support pole helps create the exact same ICEBOX® Igloo every time. (no guesswork)

Strength to Last the Season

An ICEBOX® igloo snow shelter is so strong, 3 people have stood on top of a completed igloo (not recommended).

The actual cross-section of a ICEBOX® igloo snow shelter is self-supporting because it forms a catenary curve. The same theory used in the flying buttresses of the cathedrals of Europe.

ICEBOX® igloo shelter blocks are built in sequence on the wall meaning you are only handling the snow once. The igloo blocks are built in place. The builder is able to kneel or stand rather than lying down or kneeling like a snow caver. Kneeling is only required for the first row. Extend the season, you only need 6 inches of snow for an igloo, when an igloo can be built from surface snow on summer glaciers. ICEBOX® igloos have been built on frozen lakes with only 3 inches. (See North Dakota Minnesota photos.) An igloo, above all, is tall enough to facilitate standing up to stretch or get dressed.

Enjoy quiet, peaceful camping with no flapping in the wind like a tent. Winter camping in an igloo is just plain fun. 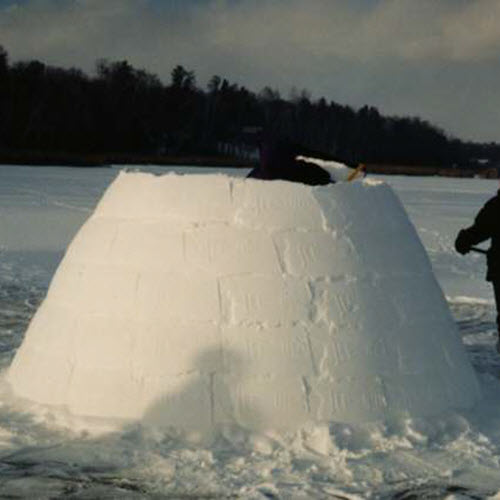 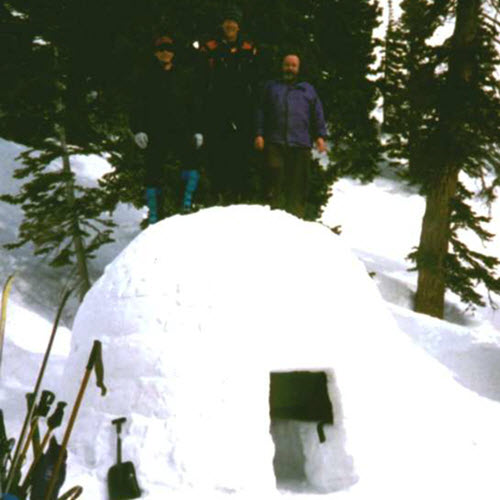